Water molecules are made up of two hydrogen atoms combined with one oxygen atom.

Water first came to planet Earth about 4 billion years ago, by giant comets, which are capable of carrying billions of tonnes of water.

Deep inside our planet, high temperature volcanic springs released hydrogen and oxygen atoms into the atmosphere, which reacted violently together.

The resultant stormy vapour built up over the next 3 billion years to create a protective envelope, which trapped the sun’s heat.

The world, which was back then in deep freeze, slowly warmed, and the frozen water molecules started to defrost.

Steam condensed, rain fell, forming rivers and oceans. Water evaporated, and started the first ever water cycle. This first rainfall has since circled the world through the cycle over 8 million times.

The bacteria living off these springs are thought to be almost identical to those that lived 3.8 billion years ago: the ancestors of us, and all living things. All living things still need water to survive.

75% of a human brain is water and 75% of a living tree is water. Water makes up about 70% of a human body, and is used to regulate body temperature, carry nutrients and oxygen to cells, cushion joints, protect tissues and organs, and remove waste. A person can live a month without food, but only about a week without water.

Water is the most common substance on the planet. Water vapour in clouds consists of water molecules constantly bumping and reacting, releasing and absorbing energy; which causes storms, thunder and lightning. The passage of water over land, through streams and rivers, or by glaciers and ice sheets has split continents and changed land mass. Water regulates the planet's temperature.

The water that exists today is the same that existed 4 billion years ago. Part of the water in a human body would have once existed as part of a Neolithic man, sabre-toothed tiger or Triassic dinosaur.

About 70% of the Earth’s surface is water. Only 2.5% of the planet’s total water is not salty, and two-thirds of that is locked in ice and glaciers. Of the remaining amount, 20% is in areas too remote for human access, and of the remaining 80%, three quarters comes at the wrong time and place (monsoons and floods), and is not captured for use by people. The remainder, which can be used by the human population, is less than 0.08 of 1% of the planet's total water.

Papplewick is situated over Sherwood sandstone, which acts like a giant sponge, soaking up, storing and naturally filtering impurities from the water. This sedimentary rock is over 200 million years old and extends over a vast area.

Twenty percent of this rock is made up of holes into which rainwater trickles and is stored. When water is removed, for example from a well sunk into the stone, then more water percolates down to replace it. As the water trickles through the stone, most of its impurities are removed.

The Demand for Water

Of all water used, 70% goes on agriculture (of which three-quarters evaporates), 22% is used in industry and 8% is for household use.

In the UK, the water industry has more than 700,000 km of mains and sewers, enough to stretch to the moon and back.

The UK water industry has 1,584 boreholes, 666 reservoirs, and 602 river abstractions - two-thirds comes from surface water and one-third from ground water.

On average, Severn Trent supplies approximately 250 million litres of water a day to the Nottinghamshire area.

Nottingham gets its water from 2 different sources. The west and south of the city (approx 260,000 people) get water from the River Derwent after being treated from the Church Wilne Water Treatment Works. The north, east and city centre (approx 150,000) get their water from the groundwater Bunter Sandstone areas of Nottinghamshire.

Today, on average, each person in Nottinghamshire uses about 127 litres of water a day. Our grandparents used just 18. On average, a Kenyan uses just 4 litres a day.

A garden sprinkler uses the same amount of water in 1 hour as a family of 4 uses in 2 days.

Washing machines and dishwashers used over 500 billion litres of water in the UK in 2000 alone. 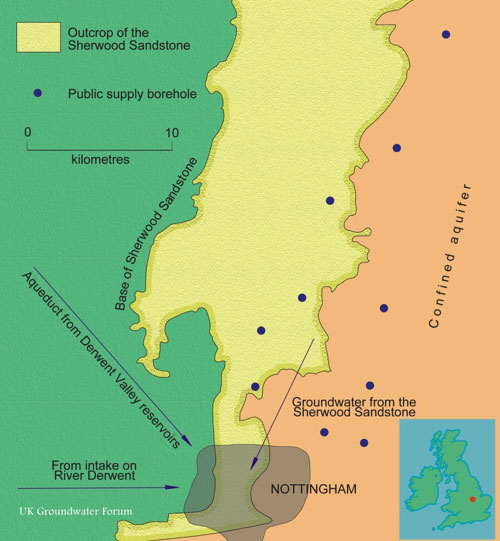 The United Nations General Assembly declared the years 2005 to 2015 an International Decade for Action ‘Water for Life’.

The primary aim of the ‘Water for Life’ decade is to help progress international commitments made on water and water-related issues by 2015.

These commitments include a Millennium Development Goal target to reduce by half the proportion of people without access to safe drinking water by 2015 and to stop the selfish use of water resources that could not be maintained in the longer term.

The UK Government Department for International Development manages Britain’s aid to developing countries. It has committed its support to the UN Millennium Development Goals.

1) Sanitation and a safe, clean water supply close to people’s homes brings benefits which go way beyond the expected improvements to health and the reduction in time spent collecting water.

2) Water, sanitation and hygiene education when combined provide the foundation for all other development and is key to reducing poverty.

1.1 billion people in the world do not have access to safe water – roughly one sixth of the world’s population.

2.6 billion people in the world do not have access to good enough sanitation – roughly two-fifths of the world’s population.

1.8 million children die every year as a result of disease caused by unclean water and poor sanitation. This equates to some 4900 deaths a day.

The number of deaths caused by diarrhea can be reduced by an average of 65% where there is combined provision of safe water, sanitation and hygiene education.

At least 90% of drinkable water in the world is underground. This water is increasingly under threat from being steadily reduced and from being polluted.

Since 1950 the world population has doubled but water consumption has increased six-fold.

The average person in the developing world uses 10 litres of water a day for their drinking, washing and cooking. This is the same amount used in the average flush of a UK toilet.

The weight of water that women in Africa and Asia carry on their heads is commonly 20kg, equal to the average UK airport luggage allowance.

Over 80 countries with 40% of the world’s population are subject to water shortages.